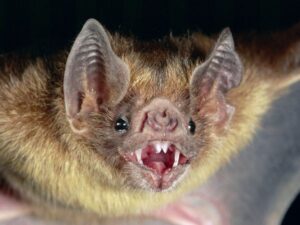 On the western side of Lake Norman, Denver, Catawba Springs, NC is known for its flourishing bat population. While this is a very good thing for the bat population, but when bats get into the attic of homes then it can become a problem. Recently there was a bat removal job in the Smithstone Denver NC and the customer contacted me with his frustration about a proposal from another bat control company. The customer told me that they had been quoted $1250 to remove the bats from their attic and clean up the bat droppings in the gable screen. I told the homeowner that I would come out and take a look for free. After completing a visual inspection of the outside, it was clear that the customer had been given a very high estimate.

They only had 2 small gable vents in the front that needed to be sealed with hardware cloth and one bigger vent in the back that was the only one that had bats in the gable vent. The back gable where the gable where the bats were getting in needed a one-way door that would later need to be remov approximately 7 to 10 days later. Bats are protected so they are not allowed to be harmed or removed inhumanely. There were bat droppings on the siding of the house that and you could also see the brown stains on the back gable vent from the bat pee and the rub marks where the paint was discolored. There were also a few small roofline gaps that were potential bat entry points that needed to be sealed up with silicone.

After finishing up the exterior bat inspection, I moved inside the attic to look and make sure the bats in the attic were localized to just the back gable vent. There were about 40 or 50 little brown bats (little brown myotis or myotis lucifugus) that were roosting in the gable vent. It was clearly a maternity colony because you could see about 5 or 6 baby bats. They were not fully developed and most likely it was too early for them to leave the colony. The customer also mentioned he had found a dead baby bat in the yard a couple days earlier. Most likely the baby bat had fallen out of the gable vent and wasn’t able to fly yet.

After the bats in the attic were gone the rear gable vent was going to need all of the bat dropping in the screen cleaned up and disinfected. Because of the shear amount of bat guano in the screen, some of the screen had collapsed and the bat poop was on the insulation. The contaminated insulation was in a small area below the bat infestation and would need to be cleaned up and replaced with new insulation. After concluding my inspection I gave the customers an estimate of a 1/3 of what the other bat pest control company had quoted them. They were not only happy with the price but the service once the job was complete.