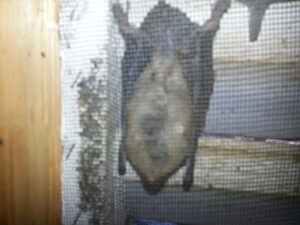 Under North Carolina law Wildlife Damage Control Agents in Huntersville NC, Cornelius NC and Davidson NC may not issue depredation permits for bats. The reason for this is because certain bat species are protected or endangered. All bats must be excluded from the house using proper bat removal techniques.The most common bat in the Mecklenburg County NorthCarolina area including Huntersville, Cornelius and Davidson NC is the little brown bat. Even though this bat is not endangered, threatened or a special concern species, we as a bat removal company are required to humanely get rid of bats. One of the most common questions that I receive as a bat control professional is how to safely remove bats from the attic. This is a very complex question but the best answer is to use trained professional that has extensive knowledge of bats living in attic and is licensed with the North Carolina Resources Commission as a Wildlife Control Damage Agent. Bats in the house can carry rabies as well as their bat droppings. Also make sure you use a local company that has an A Rating with the BBB or has good reviews with yellowpages. The most important factor in controll bats in an attic is a thorough bats inspection. This inspection is not just limited to looking to rid bats of the attic but also inspecting the exterior for potential bat problem areas. These areas could be bats in the gable vents, bats in the chimney, bats in the eaves and bats in the soffit. We have all heard the saying bats in the belfry but when you hear the term bats in attic please take this situation seriously.

Once the attic has been inspected by a Huntersville Cornelius Davidson bat removal specialist  and confirmed that there are no more bats in the attic, then the bat guano cleanup process can begin. Bat clean up is the final phase once the bats have been extracted and the bat exclusion work has been completed. An integral part of the bat extraction process is the bat guano removal. The bat guano clean-up consists of removing the bat droppings in attic with a high powered vacuum that has a filter on it to limit the dispersal of potential harmful particles in the air. The scientific name for bat droppings is called bat guano. Bat guano is extremely toxic if it is present in the attic. Once the bat poop removal has been completed, the insulation that was contaminated will need to be removed as well and replaced with new insulation. Also a disinfectant would need to be applied by bat control specialist.

After a bat problem has been identified, it is important to do research on which bat control company that you plan on using. It is good to use a bat removal company that is in Huntersville Cornelius Davidson and that they have experience with bat eradication. Many people are under the misconception that certain products on the internet can be used as bat deterrents. Examples of the products used for eradicating bats are strobe lights and high frequency plug in devices. When you see these products run as far away from them as possible. Once you have a bat infestation, they has imprinted on your attic and will not leave because of these products. Bat elimination is a process and if you don’t follow the proper steps, you will either end up with a bat in your house or future bat problems. A big factor with today’s economy is the bat removal cost. Bat infestation removal can be very expensive and some Huntersville Cornelius Davidson bat control companies might use scare tactics to increase the bat removal cost. If you have bats in your attic, chances are they have been there for a while and they have gone undetected. There is no reason that you should go with the first bat exterminator that you speak with on the phone. Bats are protected, so bat extermination is illegal. If the company that you speak with is unaware of this or is not in compliance then that should be a red flag. Recently bats have been in decline because of something called white nose syndrome. This is caused by a fungus that grows on the bats nose and caused the death of millions of bats and some to become endangered. Before this was discovered most bat removal experts were known as bat exterminators. Because of the discovery of the white nose syndrome, the bat exclusion is the method of removing bats from your home.