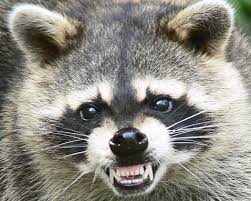 We just did a Raccoon Removal Charlotte NC and I just want to give a few details on these pesky little critters. The raccoon is nocturnal and not very shy when encountered and can be encountered during the day.The nesting areas include tree branches, burrows, hollow trees or raccoons in attic during the day. These animals are extremely agile and are know for their dexterity. The wrists of a raccoon can rotate 180 degrees for climbing rocks, stucco, bricks and trees. Even if you cut back all the trees within 100 yards of your home, Raccoon Removal Charlotte NC is still going to need to be performed.

Raccoons are most notable for sifting through garbage cans to get a meal. The are mostly omnivorous and their diet when not feeding on human scraps include a wide variety of plant and animal food. They normally will hunt along streams and marshes. Another common food source is humans leaving out food for animal such as cats or dogs. Raccooons are normally solitary and extremely territorial. They are also the leading terrestrial carrier of rabies. Adult females will normally stay in the same area while males will cover a larger area to find a mate. Males are also know to have multiple residences. They might disappear for weeks from their attic home before returning to cat a goood day of sleep.

The breeding season for raccoons is in the spring months usually April or May depending on the geographical location. Usually the babies are born earlier in warmer locations like Florida. On average there are 2-7 pups in a litter. The baby raccoons in the attic don’t usually begin to hunt for food on their own until the summer months after they are born. On average it is 2-3 months that the raccoons start to become less dependent on their mothers milk and begin to hunt for food. In residential settings the hunting could be raiding the dumpster behind the local Papa John’s for a slice of pizza. They won’t leave to go off on their own until 6-9 months. The most common habitats are in suburban areas where they have adapted to humans leaving food out for them to eat. Other common habitats include wetlands and damp woods.